LASIK surgery is the most common refractive surgery procedure that patients undergo to correct their vision. It has historically been shown to be a simple and safe alternative to wearing glasses or contact lenses, as long as a patient has been deemed a good candidate.

Even though patient outcomes are very positive in a high percentage of cases post-operatively, it is important to be able to properly handle potential problems that can arise from this type of surgery. Some of these issues are completely normal and expected in the early post-op period, so a little hand-holding and patient education will often be all these patients need, while other undesirable symptoms may require additional treatment.

Here we will review seven of the most common potential complications you may come across when co-managing LASIK patients.

Dry eye following LASIK surgery is a very common symptom that patients report. Approximately 20-40% of patients will tell you that they notice some degree of dryness, burning, itching, or discomfort following surgery. It is important to treat any dry eye signs or symptoms prior to LASIK surgery and discuss this potential side effect with your patients pre-operatively so that they don’t become alarmed if they develop these symptoms. All patients, whether they report dryness or not after surgery should be using a preservative artificial tear frequently during the healing process.

When it comes to persistent dry eye, studies have shown that dry eye symptoms usually resolve within 6-12 months of surgery. Up to 20% of patients have persistent symptoms, although only 2-3% consider their symptoms to be bothersome. These patients’ symptoms can be treated with additional therapy such as punctal plugs and topical medications.

Visual symptoms such as glare, halos, and starbursts can affect up to 20% of patients who undergo LASIK surgery. These issues are typically noticed when patients drive at night. Like dryness, these symptoms typically fade over the first few months post-operatively. I always let my patients know that this is a common symptom, and to again, not be alarmed if they experience these issues. Less than 1% of patients report glare and halos to give them “a lot of difficulty” in general with their normal daily activities. Newer technologies such as topography-guided LASIK report a lower incidence of these types of visual symptoms following surgery.

Diffuse lamellar keratitis (DLK) is a noninfectious complication that can occur following LASIK surgery that is characterized by the presence of inflammatory infiltrates beneath the corneal flap interface. Because of the grainy appearance, some refer to this condition as “sands of Sahara syndrome.”

DLK typically presents 1 to 2 days following LASIK and often resolves within 5 to 8 days after the initiation of appropriate therapy (which is usually increasing the frequency of steroid drops). It only occurs in approximately 2-4% of patients post-operatively.

Ingrowth of epithelial cells into the corneal flap interface is another complication that can occur following LASIK surgery. The incidence of visually significant epithelial ingrowth is approximately 1% in primary cases and 2% in enhancement cases.

This finding is often asymptomatic; however, these cells can cause decreased vision due to irregular astigmatism or direct intrusion of cells into the visual axis and can also cause melting of the overlying flap. If you see epithelial ingrowth in a post-LASIK patient who is asymptomatic, you may just monitor the patient for any changes. If the patient is symptomatic or corneal melt is likely, the patient should be referred back to the surgeon for treatment. In these cases, the flap will need to be lifted and cells removed from the interface.

Folds or striae of the LASIK flap can be observed in up to 4% of patients after LASIK surgery. These can occur due to several reasons such as excessive irrigation of flap during the procedure, poor repositioning of the flap at the end of surgery, thin flaps, deep and highly myopic ablations with flap/bed mismatch or rubbing of the eyes following LASIK.

Macrostriae are full thickness stromal folds that occur due to flap malposition or slippage. These should be sent back to the surgeon for immediate refloating and repositioning of the flap. Microstriae are fine folds in Bowman’s layer that occur because of a mismatch of the flap and the flatter residual corneal bed. These are much more common than macrostriae, are often visually insignificant, and usually do not require treatment.

Luckily, infection following LASIK surgery only occurs in approximately 0.1% of patients. It is one of the most vision threatening complications and requires immediate, aggressive treatment. Patients will present with decreased acuity, pain, photophobia, and redness. If infection under the flap is suspected, the surgeon will need to lift the flap, culture the interface, and irrigate the interface with antibiotics. Additionally, fortified topical antibiotics are also necessary.

7. Under or Over Correction

Overall, most post-LASIK patients have positive outcomes without complication. The PROWL study reported that 93% of patients were completely satisfied with the LASIK procedure itself, and only 2% were dissatisfied with their vision after surgery. And 97% of patients stated that, in retrospect, they would still have LASIK. Proper patient education both pre- and post-operatively will help ensure your patients are happy with their decision to proceed with LASIK, and we hope these points help you when talking to your patients and managing their post-op concerns! 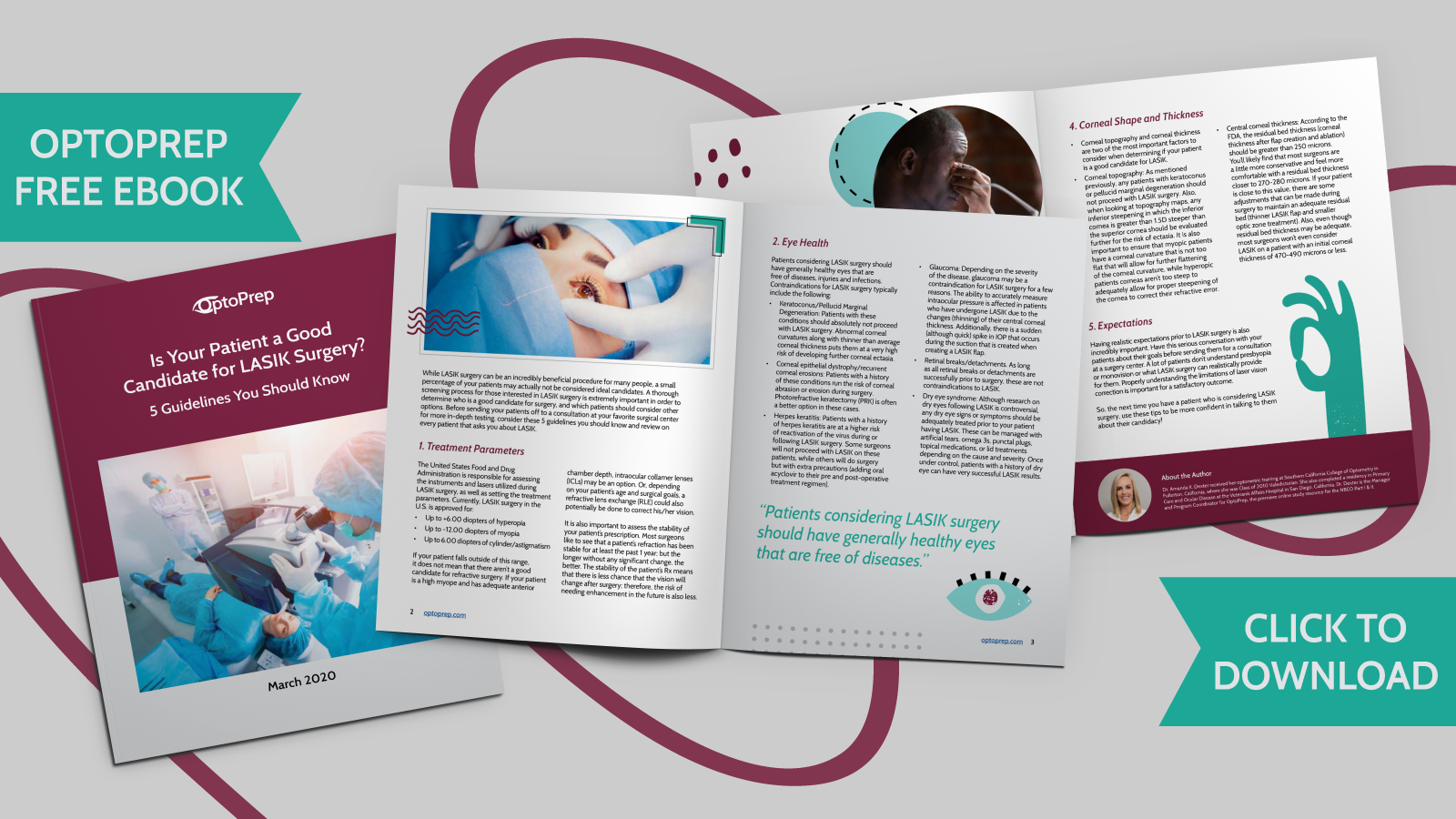